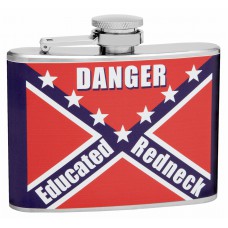 The confederate flag is also known as the rebel flag, Dixie flag, and Southern cross.   Most do not know this, but the flag that is largely known and recognized as the confederate flag was never a recognized national flag of the southern states. It was actually a flag that was adopted as a battle flag by the Army of Northern Virginia under General Lee after it was rejected as the national flag in 1861.  Regardless of the flags origin, the flag means a lot of different things to many different people.  Whether it is representing resistance against government oppression or to honor those that lost their lives in the civil war, here is a flask for you.  The text on the flask states “Danger, Educated Redneck.” The text is in front of a Dixie flag themed background. You can get this flask personalized with your choice of text.