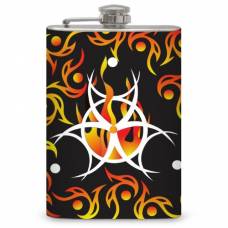 Recognizable, like the peanut man for Planter's peanuts, the Texaco star, the Shell Oil symbol, or the Red Cross. There were many different biohazard-related warning symbols in use by the late 60's. A standardized symbol had to be unique and something that would be striking enough that it would be remembered. What came about was something that started off meaningless and yet has become another iconic symbol. Across various mediums and varied uses different biohazard-related images are used to imply an essence of danger.

This variation is no different, “do not drink, danger therein lies within this flask” The solid black background is broken up by random Celtic designs of fire. The bio-hazard variation in the center is white instead of the traditional blaze orange.