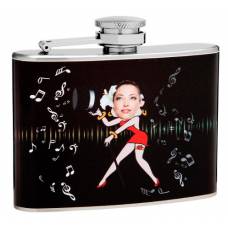 A symbol of the bygone roaring twenties and all of its wonderful debauchery, the Betty Boop cartoon was a hit with adults and later with children, when she became more toned down. She was more than the caricature of a flapper, Betty Boop was sexually autonomous and outspoken against the old values asserted by her parents and the previous generations, after the infamous Hays Code forced morality restrictions on film, the sexual and psychological undertones of Miss Boop were almost entirely eliminated. The character was essentially relegated to a more demure career girl in later years, yet Betty Boop remained a household name for decades.

This flask, with a black background features a musical theme with soundwave and musical notes. The body of Betty Boop in a short red dress, red high heel and to complete the ensemble garter belt with heart. She is also tipping a top hat.  We can take your digital picture and crop the face and overlay it over  Betty’s face making you the cultural icon of the 2010’s.