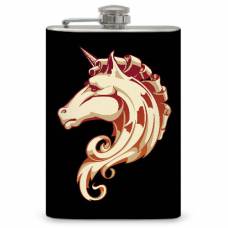 The unicorn is a legendary animal that has been described since antiquity as a beast with a large, pointed, spiraling horn projecting from its forehead. The unicorn was depicted in ancient seals of the Indus Valley Civilization and was mentioned by the ancient Greeks in accounts of natural history. In the Middle Ages and Renaissance, it was commonly described as an extremely wild woodland creature, a symbol of purity and grace, which could only be captured by a virgin.

Make this flask as legen... wait for it... dary as the Unicorn itself. This is YOUR custom flask, we can add any text you wish.