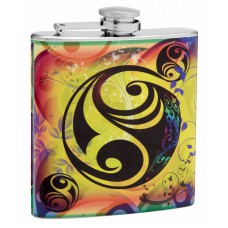 ﻿In Chinese philosophy, the concept of yin-yang, which is often called "yin and yang", is used to describe how seemingly opposite or contrary forces are interconnected and interdependent in the natural world.

These forces give rise to each other as they interrelate to one another. Many natural dualities***, such as; female and male, light and dark, good and evil, low and high, cold and hot, water and fire, life and death, and so on... are thought of as physical manifestations of the yin-yang concept.

Chinese people love this symbol, as do Buddhists, Taoists, and many other people the world over. Even from a non-religious standpoint, the symbol is loved by many, from the Hippies of the 1960’s to the youth of today who think of the symbol as “cool.”

Here is a colorful, fun, and almost psychedelic version of the yin-yang symbol on a hip flask, suitable for gift-giving for just about any occasion. Although a Buddhist Monk might not be likely to carry one of these flasks, it can be a fun gift to almost anyone else, at least in the Western World.

We have an enormous selection of flasks, as you can see, and we are happy to serve you, whether you need one, or one thousand! You may also like to add a funnel, a gift box, and two shot glasses to your order, for an even more impressive gift!

Here at Flasks.com we offer free engraving, or other personalization, and we can handle all of your flask and gift-giving needs.